Lockheed Martin's Bad Stretch Was Still Better Than Yours 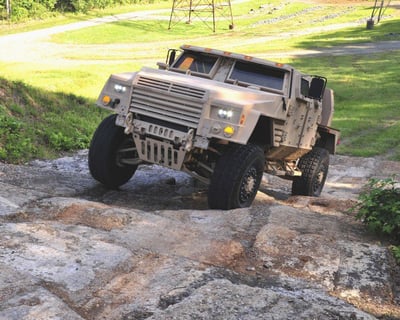 In August, Oshkosh Corporation won the contract to build the next generation Joint Light Tactical Vehicles (JLTV) for the Marines and the Army. Lockheed Martin and the incumbent, Humvee manufacturer AM General, were the runner-ups.

In October, Northrup Grumman won the contract to build the Long Range Strike-Bomber (LRS-B) for the Air Force. Lockheed Martin was again the runner-up, this time despite their joint effort with Boeing. [Weren’t we just talking about frenemies?]

The first one hurt. The contract was for $6.75 billion USD, and Lockheed had bought partner BAE Systems’ entire wheeled vehicle production line and literally moved it from Sealy, Texas to Camden, Arkansas in preparation.

The second one was just brutal. The United States Air Force plans to purchase 80–100 of the LRS-B aircraft at a cost of about $600 million each. Add in an estimated $20 billion for research and development, and the total value of the contract could close in on $80 billion USD. Even shared with Boeing, that would have been a massive win for the famed defense contractor.

Lockheed Martin is a huge company with net sales over $45 billion USD in 2014. Winning either contract would have been a significant boost and a feather in their cap. Winning both would have cemented Lockheed's title as the top dog among defense contractors. Instead, they have been forced to sit on the sidelines and exercise their right to a 100 day challenge and review of the contract award.

So why does this matter to you? Let’s do some math.

In the first case, the Hummer replacement contract, Lockheed was one of three finalists. The contract was worth $6.75 billion. Entering the final phase of the bidding, each of the bids had a reasonably equal shot at securing the contract – a 33% win expectancy, if you will.

That means that their selection to the final round of proposals was worth over $2 billion.  Obviously the contract was anticipated to be awarded in full to only one of the companies, but probability dictates the equal thirds of expected value.  Likewise, if we assume for the sake of simplicity that Lockheed Martin and Boeing would share the bomber contract 50-50, the math on the second deal is:

The questions for you: How much projected revenue from federal contracts are you leaving on the table? How big are the contracts being awarded to your rivals? Are you providing competitive proposals? Are you even eligible to bid?

If you don’t take the necessary steps to enter the public sector and provide proposals to bring your solutions to the federal government, your competitors will run wild. Their win expectancy skyrockets if you don’t participate. They can bid whatever they see fit, since you didn’t submit a proposal to keep them honest. Imagine what they’ll do with that padded profit margin - fund more R&D, increase their salesforce and marketing budget, boost their payroll so they can hire away your very best people. It won’t be pretty… except for their shareholders. They will reap the PR benefits of winning the contract, and the earned credibility will fuel efforts to parlay their success in the public sector to other regulated industries.

So yeah, Lockheed Martin had a rough couple of months when they didn’t win either contract… but it was still a better stretch than the rest of the companies who had been sitting on the sidelines all along.

These two contracts have been awarded, but there a lot more currently open and coming soon for a variety of agencies and branches, for nearly every type of technology you can imagine.  If you want to be eligible to bid on these contracts and sell to the federal government, you need FIPS 140-2 validated encryption. SafeLogic provides immediate compliance and a full validation, in your name, in 8 weeks. Let’s get you in the game!