Giving Thanks for Decryption

The year was 1621.  The place was Plymouth, Massachusetts.

I know what you’re thinking, but don’t worry.  No, of course I wouldn’t try to draw a connection between Thanksgiving and encryption.  That would be silly and far-fetched.

It’s actually about decryption.  So there.  Now back to the story!

The Pilgrims had suffered a great deal since the establishment of Plymouth Colony, and may have perished or given up, if not for improved relations with the Wampanoag tribe nearby.  Their chieftain was Massasoit, whose greatest contribution to history was his decision to embrace an alliance with the colonists and appoint an ambassador. 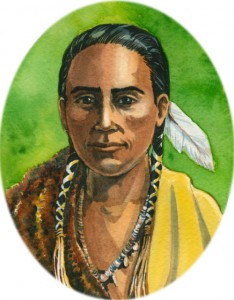 Tisquantum, or Squanto, as he has been immortalized in our American lore, was the key to the survival of the Pilgrims.  He was the spokesman for the Wampanoag, although he was in fact Patuxet, a traditionally allied but distinctly separate tribe.  So why was Tisquantum allowed to be the liaison and represent a tribe that was not his own?  Because he was the decryption key between the two ciphers.  He spoke both languages, as a result of spending the bulk of his young adulthood in England and Spain.

In truth, the Wampanoag tribe’s survival depended as much on the Pilgrims as vice versa.  The tribe had been threatened by attacks from the inland Narragansett, and suddenly the colonists and the Wampanoag found their goals aligned.  If Tisquantum had not been able to translate and broker an alliance, both groups would surely have perished.

My point is that ciphers, such as an isolated foreign language, provide security just like a modern algorithm.  As long as you don’t need to access the information, it is completely opaque and safe.  Think about that for a second – if information was encrypted to the point where decryption was no longer possible, it would be infinitely secure and infinitely useless as well.  To be valuable, information requires collaboration, and that requires authorized decryption and the ability to share the right keys with the proper people.  Without Tisquantum acting as the decryption key, each group would have remained effectively secure – but isolated, divided, and vulnerable to attack and attrition.  Encryption is only as successful as your ability to decrypt and leverage the information.

So whether you prepare the turkey roasted, or just hashed and salted, remember that Thanksgiving is really a story about decryption keys, translation, and cooperation.  Be thankful for our ability to obfuscate private data, but be even more thankful for our ability to decrypt, share, and collaborate.  Without the latter, we wouldn’t be able to use crypto at all.  And those decryption skills are particularly useful when you’re trying to decode your in-laws’ backhanded compliments.

Happy Thanksgiving from all of us here at SafeLogic!